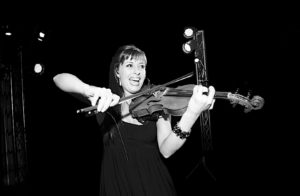 Celeste began studying classical violin at age four in Harlingen, TX, and made

her professional debut when she was only twelve. As she began experimenting

with other styles of music, she quickly discovered a passion for improvisation

and pop music, setting her apart from the typical violinist. She completed her

music degree at Southern Methodist University with a concentration in Vocal

Performance and a minor in Theater, branching out into other performance

bands based out of Texas, entertaining such distinguished guests as Carlos Slim

Helú and Presidents Bill Clinton and George W. Bush. After earning her MBA at

University of Texas at Dallas, she launched her solo career, concentrating all of

her expertise in music and business into a vibrant and sophisticated production.